The Importance of Nature in Learning 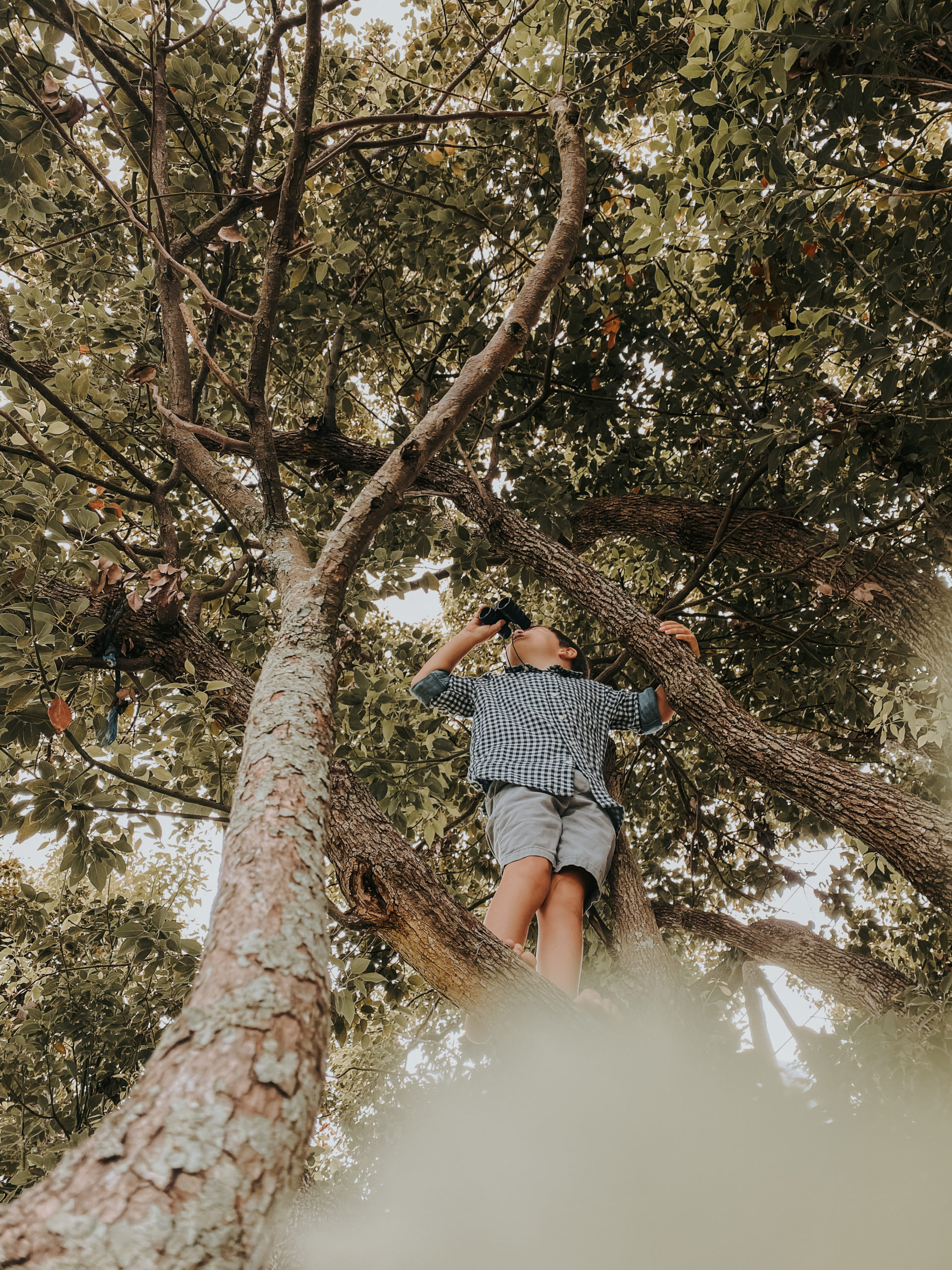 Nature was in the beginning and nature is a constant that provides us as people with nourishment, a sense of depth and vastness, and an abounding beauty that encircles us. It only makes sense that, while educating our children, nature takes center stage and is a part of the learning process. We can use nature experiences to make learning long-lasting and tap into each of our five senses to truly experience our natural world. With our sight, smell, touch, hearing, and tastes, we are able to explore, differentiate, define, and discover.

But did you know… studies have shown that kids these days are spending around just four hours a week outside? Four hours. These same kids have parents who spent, on average, eight hours a week playing outdoors. We can all speculate and hypothesize what happened to cause such a shift in what should be a crucial part of childhood, but instead of doing that I am going to share a challenge my family has been working on to help us get out more. It is called 1000 Hours Outside. The goal: to be more intentional with our time spent outdoors. An ongoing study from Northeastern University shows that children who run and play for seventy minutes per day exhibit better cognitive skills than those who don’t. Being outside has also been shown to improve eyesight, reduce stress, and support creativity and problem solving. We are aiming to blow that four hours out of the water by getting out for an average of twenty hours a week!

One of our main reasons as a family for choosing to embark on our 1000 hours outside challenge is because our three children are very young and their minds and bodies are still being developed into wonderful learning machines. Young children’s bodies need movement in order for their proprioceptive systems to fully develop. Proprioception is a person’s awareness of their body in space. For young children to develop this they need to engage in big and small movements, including, and especially, movements that require them to cross the midline of their bodies. This is why young children often seem fidgety; they are trying to gain sensory input to “locate” their bodies. Young children are being asked to sit still for too long in schools when their bodies are simply not ready. This can lead to problems paying attention. When young children are asked to hold their bodies upright, they are using a lot of brain power just to be able to do that, thus taking up brain space that could be used to pay attention. I don’t know if you have ever been talking or reading aloud to a child who is moving all about and you think to yourself, “there is no way this child is going to have any idea what I’m saying!” Sure enough, though, that child knew exactly what was being said. A child who is allowed to move his/her body is not having to focusing on how to keep his/her body still. For girls this proprioceptive system will not be fully developed until about ages 6 ½ to 8 and for boys, not until about 7 ½ to 9. Only when neural pathways are created and the two sides of the brain are fully integrated will children be most ready to learn.

So, what does that all have to do with being outside? There is no better playground, no better way to get children to move those bodies than nature! Children can engage in all sorts of movements, big and small, while playing outdoors. Climbing trees is a big movement activity that involves complex movements and requires a lot of crossing the midline of the body. Hand muscles are also being strengthened which will help later with gripping a pencil. For younger children, bending down to pick up sticks is a much simpler seeming activity, but often requires a child to cross the midline of her body. My older two children love to climb trees and while the two of them are up pushing their bodies further and further each time, my youngest loves to be down on the ground picking up sticks.

In nature, there is something for everyone, no matter their skill level. Walking on uneven terrain is great for working on a sense of balance for young children. For older children testing out a fallen log as a balance beam is doing the same thing but on a higher level. The simple activity of stacking rocks as high as you can is teeming with benefits. This activity is done with lots of attention and focus, fine motor skills are being exercised. Children doing this activity are thoroughly engaged in problem solving, creativity abounds as they try something new. They are learning to persevere through failure as their rock tower tumbles. The benefits are all there if you open your eyes to them. My children piled rocks from our garden onto the sidewalk to do just this activity the other day. I could have squashed all this learning if I only chose to look at the mess they made. Instead, we embraced the learning that was happening. When your child is engaging in something that seems risky or messy or otherwise adverse to your adult sensibilities, I urge you to count to ten. Count to ten to give yourself time to see the learning that is happening. Ten seconds to trust the process that is happening. Ten seconds to respond rather than react.

Getting outside doesn’t have to be a big event, just open the door and see what can be explored right there in your neighborhood! Something as simple as a walk around the block has huge benefits too. Eyes that are constantly shifting to look at the changing horizon will strengthen a child’s eyesight. Let your children wander slowly to bend down and look closely at something. Let them get their bodies really moving and run a bit ahead. Fight back those adult urges to hurry them on or yell for them to slow down. Allow this time outside to be their time, let it be unstructured free time, just open the door and let them go!

The more time my children have spent outside, the more time they have been asking to spend outside. As a family we already limit screen time; however, I have noticed since we started being more intentional with our time and spending a lot of it outside, my kids are spending even less time being plugged into screens. It has also gotten me and my husband unplugged a lot more and we have had some great family days spent outside! Connection to nature, connection to one another, improving our minds through improving our bodies, the benefits of embarking on this challenge have been more than I could have imagined!

Enjoy this FREE Backyard Nature Scavenger Hunt to help spur you on in your pursuit of more nature learning!

A LEARN & PLAY STUDIO Located in Lakeland, FL. WonderHere is a safe environment for children to think, play, create and learn.

Be an integral part of this awesome community resource! All the funds go to start-up costs to get this studio up and running.

Help us wish our co-founder @jessica.zivkovich a v

Repost from @jessica.zivkovich: Confession: I use

Repost @raising.wonders: “‘Creativity is for

There are seasons of WonderHere where certain idea

Repost @raising.wonders ✨ What can the Lord do

Childhood. More than just a span of time for cramm

Photo by @jessica.zivkovich: Our days lately have

Repost from @raising.wonders Are they making en

Throwing it back to the beautiful canvas of a venu

@jessica.zivkovich: When I was an Ed major in col

All for the sake of CHILDHOOD ✨ We can’t beli