Learning Figures of Speech through ART!

I am no artist (seriously, I’ve tried… not my chosen path in life)… but I LOVE integrating art into learning. Maybe it’s because I’ve had some fantastically talented artists as students, who were so turned off to academics because they didn’t feel they were good at “traditional learning”. Or maybe it’s because – even though I am not artistically gifted – I am a visual learner and can understand concept better when I can see them.

One of my biggest passions as an educator is to show kids that all subject areas are related and, in the real world, are incredibly intertwined. In my opinion, art is the subject that pairs best with every other subject. Art and math? SO much potential for learning. Art and history? YES! Art and science? You wouldn’t think so, but absolutely!

But today, I want to show you four activities where art and vocabulary come together in a way that completely engages kids in learning. These activities teach the concept of figures of speech… which is generally pretty abstract and can be a challenge for kids to understand. However, these activities will not only be a blast, but will get them understanding (and using!) these figures of speech in no time. So, grab a pencil, scissors, glue, a few markers or crayons, and a whole lot of creativity!

Out of all of the figures of speech, oxymorons might just be one of the most challenging for kids to recognize and understand. An oxymoron is a “figure of speech in which apparently contradictory terms appear in conjunction.” In other words, two opposing concepts making up one phrase. An example is the phrase awfully nice. Is it awful? Is it nice? It’s so nice… it’s awful! 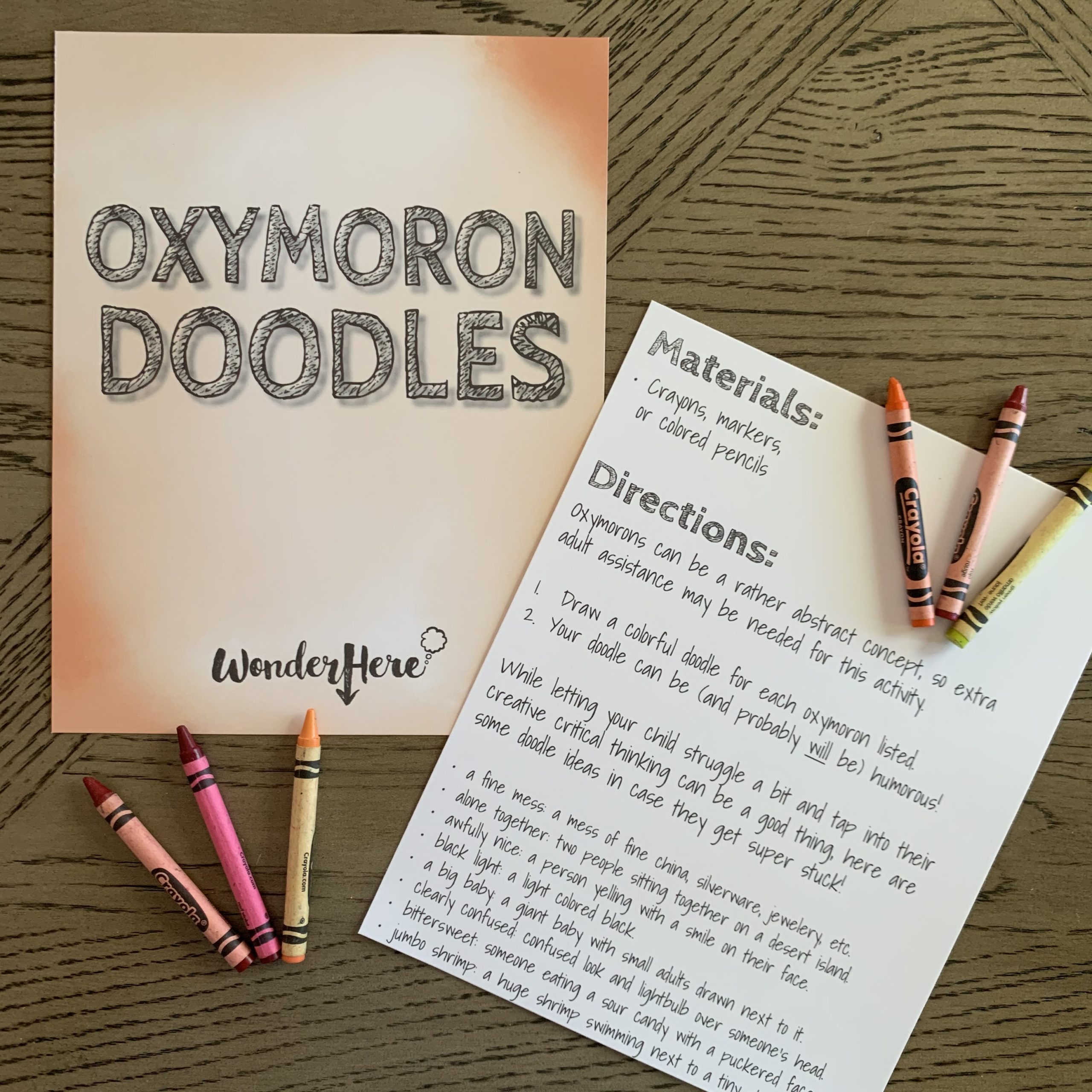 In this activity, your child will practice drawing doodles for eight different oxymorons. Their doodle can be (and probably will be) humorous! For example, for the oxymoron bittersweet, I once had a student who drew a cupcake with a pickle on it. Gross! Obviously the term bittersweet has nothing to do with taste, but rather a situation that is bitter (sad) and sweet (happy) at the same time. These doodles will provide excellent opportunities to discuss with your child each oxymoron’s meaning!

While letting your child struggle a bit and tap into their creative critical thinking can be a good thing, we do give some doodle suggestions in the activity in case they get super stuck! As an extension to the activity, encourage your child to write original sentences containing each oxymoron.

Think of personification as the metaphor’s crazy cousin. Both figures of speech are constantly confused for one another. Personification is when you attribute human characteristics to a non-human or object, or representing an idea in human form. A metaphor is a comparison between two things without using words such as like or as. 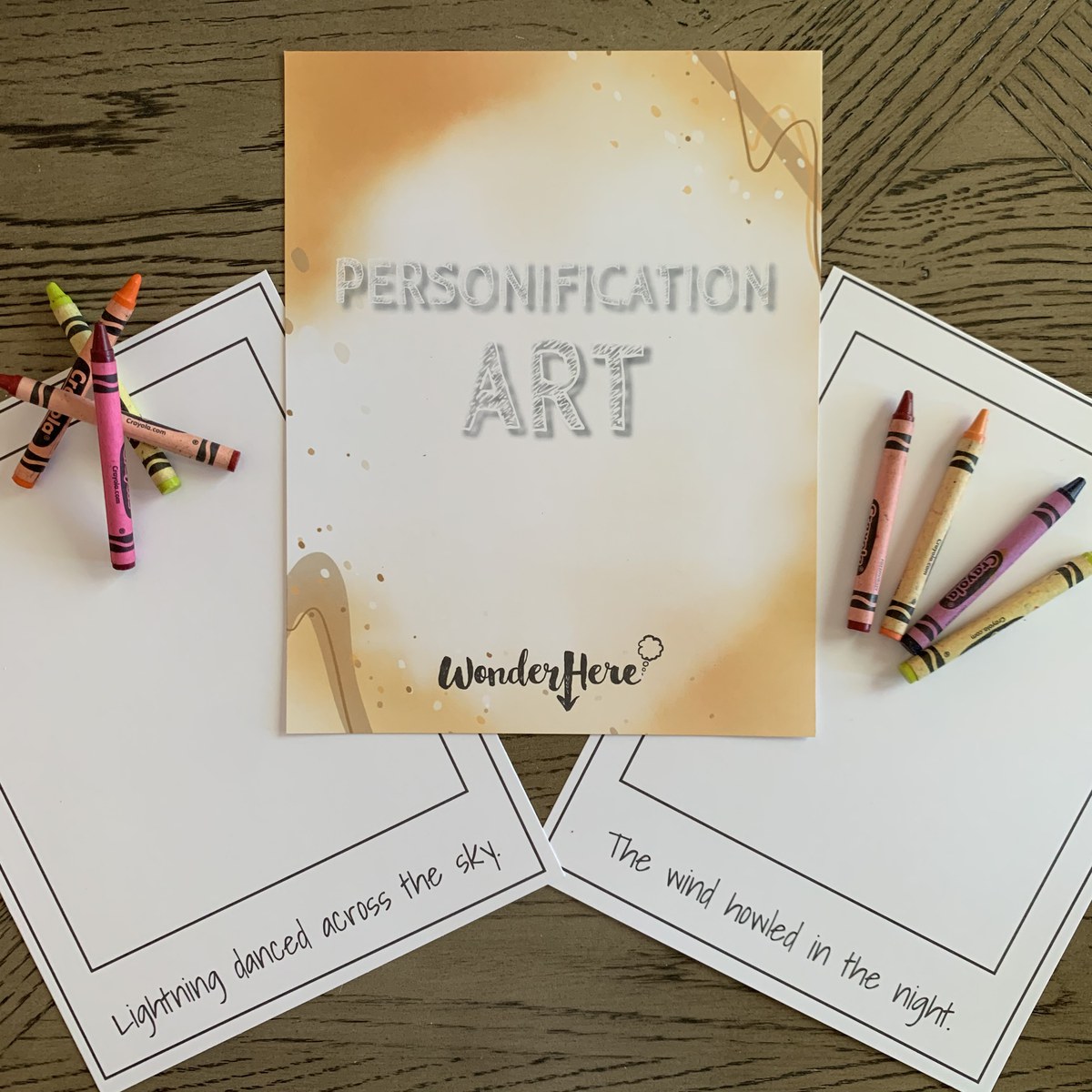 Here’s an example of personification:

Lightning danced across the sky.

In this sentence, the word lightning is said to be dancing. Well, only humans can dance, really. But the author chooses to describe lightning as dancing to show that it is moving across the sky. Using the personification word dancing instead of moving is much more poetic and descriptive!

For example, with the sentence Lightning danced across the sky, your child might draw a lightning bolt dancing, maybe with some tap or ballet shoes and a tutu!

Here’s another one: My alarm clock yelled at me to get out of bed this morning might prompt your child to draw an alarm clock looking angry and yelling at you as you’re still snuggled up in bed asleep.

Just like with Oxymoron Doodles, allow for this activity to create discussion about what the author is really trying to say through personification. Extend the activity by challenging your child to come up with their own sentences containing personification, and in return they can challenge YOU to come up with a drawing for it! 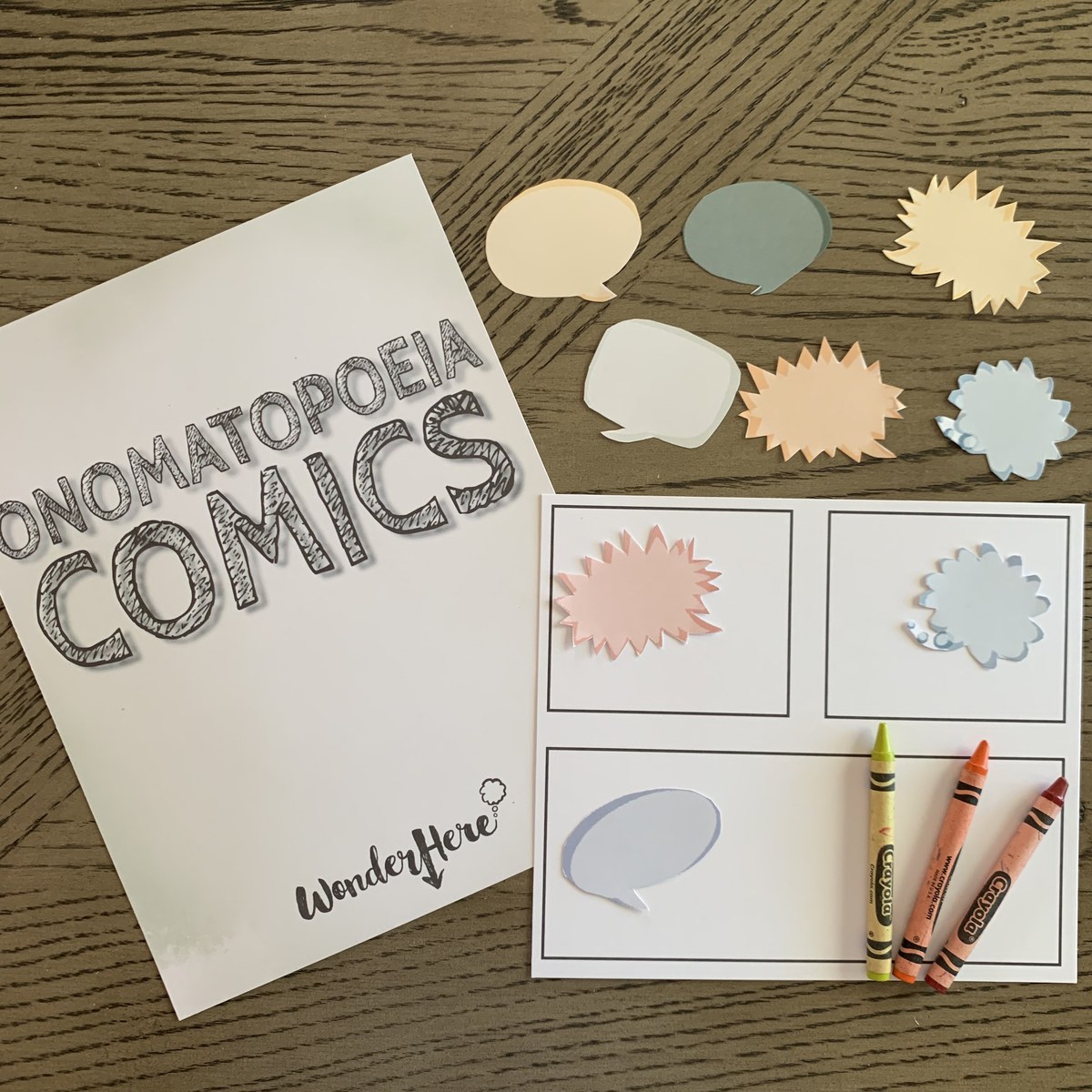 Onomatopoeia is not only fun to teach, but also probably the easiest figure of speech for kids to understand, because they can recognize them pretty easily! In the activity Onomatopoeia Comics, your child will get to create an original comic that uses Onomatopoeia words! Onomatopoeia words are very often found in comics with a lot of action – words like POW! BAM! SMACK! WHOOSH! and so on.

Our Onomatopoeia Illustrations activity offers a different – yet equally as artsy – way to practice the concept. In this activity, you’ll get six full page spreads of onomatopoeia words in LARGE print. Print these out and encourage your child to “decorate” the page according to the object or concept the onomatopoeia word represents. In the picture below, we have an example of what your child might draw for the word BUZZ:

Encourage your child to be as creative as possible with their illustrations! As an extension to the activity, they can come up with additional onomatopoeia words to illustrate and can use the words in a sentence.

There you have it! We sincerely hope these activities engage your child in creativity, and that they know that they can have fun and be artistic even when learning academic concepts! Also, remember to CELEBRATE your child’s art by displaying it somewhere and giving them the opportunity to showcase their finished products. When we do this, we celebrate their effort, give them ownership of their work, and build their confidence. And that, my friends, is more important than any figure of speech they could ever learn.